Check out our excellent reviews online. Read our reviews

Check out our excellent reviews online. Read our reviews If you want to explore Shakespeare country or picturesque ‘Archers’ countryside, then starting from Worcester is the place for you. With multiple and varied routes to to choose from, including the newly open Droitiwich Ring, there is something for everyone.

The re-opening of the Droitwich Canals has created a brand new cruising ring for boaters which can easily be completed in a weekend break.

Request one of our brochures

A little bit about Worcester

The City of Worcester is located on the Worcester and Birmingham Canal overlooked by the 12th century Worcester Cathedral. It is home to Lea & Perrins factory where the traditional Worcestershire sauce is made and the birthplace of the composer Sir Edward Elgar.

Find out more and book online Keep in touch with us on social media to stay up to date with our offers and competitions.

Use hashtag #abcboathire and share your boating photos with us!

Keep in touch with us on social media to stay up to date with our offers and competitions.

Use hashtag #abcboathire and share your boating photos with us! 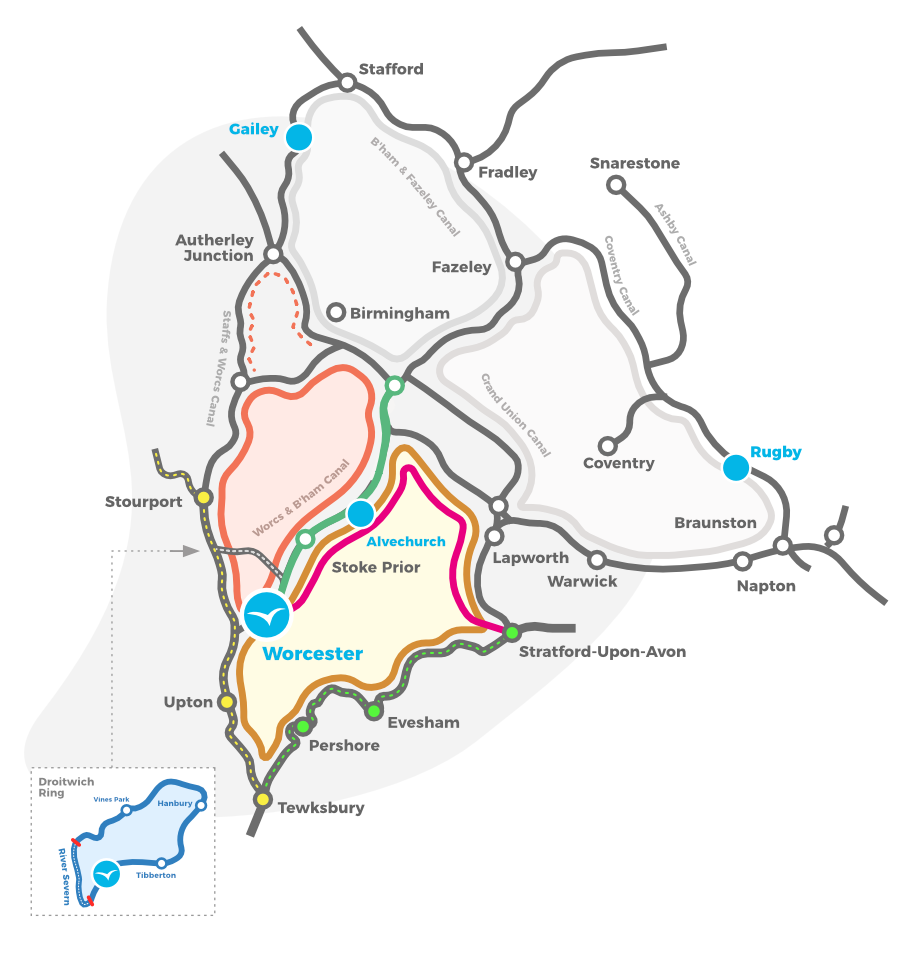 One of the most popular one-week cruises of all. This route of contrasts takes in the 21st century Birmingham city centre, 19th century heritage and some of the most rural stretches of canal imaginable along with the river Severn .

Much of the stunning new development in Birmingham city centre is focused on the canalside area – Symphony Hall, the International Convention Centre and the Sea Life Centre. Branch off to the impressive Netherton tunnel or visit the award winning Black Country Museum . Birmingham TIC 0870 2250127

If time permits, experience the wonder of steam trains on the Severn Valley Railway, with a trip from Kidderminster to the picturesque market town of Bridgnorth. 01299 403816 www.svr.co.uk

Take an enviable river perspective of the magnificent Worcester cathedral in a city where you will also find both quaint and modern shopping malls and, of course, the Royal Worcester Porcelain museum.

Avon licence required for this trip, obtainable at Tewkesbury Lock

Cruise through idyllic stretches of countryside to this historic town, each route offering a superb mixture of culture, history and shopping. Moor in the beautifully maintained canal basin at Stratford , near to the Royal Shakespeare Theatre.01789 403444 www.rsc.org.uk

The convenient Tourist Information Centre 0870 1607930 gives details of all you need to know about Shakespeare’s birthplace.

Avon licence required for this trip, obtainable at Tewkesbury Lock or Stratford

To really enjoy the delightful river cruising on both the Severn and Avon you will need at least a 10 or 11 night break, but is ideal if you have the full 14 nights. In fact, allowing two weeks enables a detour down to Gloucester to visit its docks, warehouses and museums.

Worcester ,Tewkesbury, Evesham and Stratford each offer a superb mixture of culture, history and shopping.

Passing through Worcester by canal, you join the River Severn for a leisurely cruise up to Stourport where you join the Staffordshire and Worcestershire Canal .

Here you will appreciate the contrast between the wide river and the more intimate atmosphere of the canal, which threads its way unobtrusively through the landscape, encouraging you to stop at will. This canal takes you north past dramatic sandstone rocks and through the beautifully preserved Bratch locks towards Autherley Junction where you have the opportunity of joining the Shropshire Union Canal for a short while.

You will probably want to turn here in order to make the most of the return journey which, apart from opening up new views of the countryside, will give you a chance to visit some of the attractions you may have missed on the way up, such as the Severn Valley Railway, or the sandstone caves at Austcliffe.

Stourton and return is a great 4 night trip starting with the River Severn and heading up to Stourport. From there it’s through Kidderminster before you reach the junction at Stourton.

This route enables you to see the beautiful Staffordshire and Worcestershire Canal as well as the view from the River Severn taking in the best of North Worcestershire.

This new ring can be cruised again for the first time in over 90 years. It combines four contrasting waterways : The Droitwich canals, the southern part of the Worcester Birmingham Canal and the River Severn north of Worcester. It’s a ring that can be cruised easily in a weekend or a little longer if you wish.

This is a great cruise up the Worcester & Birmingham canal which takes you north through rural Worcestershire where you pass through the very heart of ‘Archers’ country to the beautiful village of Stoke Prior. This trip is ideal for doing in 3 nights.